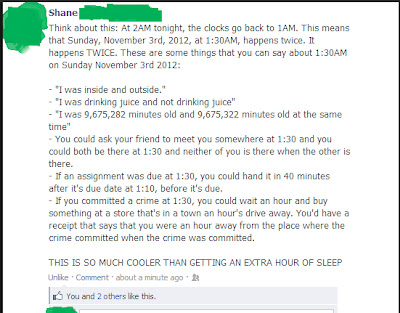 After thinking about it a little, I think these are probably not good candidates for true contradictions: rather, it looks like 'Sunday November 3rd, 2012 at 1:30AM' is ambiguous.  And it is not a true contradiction when 'Maria was a philosophy major' is true and 'Maria was not a philosophy major' is also true, if there are two different people named 'Maria' (and the first majored in philosophy but the second didn't).

Or is there something special about time, that makes these daylight savings cases different from garden-variety ambiguity cases (like 'Maria')?  Am I missing something?