Morals and Mood (Situationism vs virtue ethics, once more) 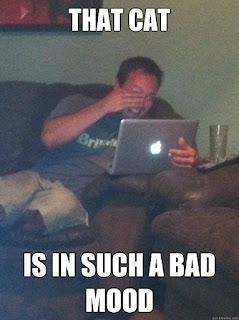 Given how much has been written in the last couple of decades about the situationist challenge to virtue ethics, I'm guessing someone has probably already said (something like) this before. But I haven't seen it, and I'm teaching both the Nicomachean Ethics and the section in Appiah's Experiments in Ethics on situationism vs. virtue ethics now, so the material is bouncing around in my head.

First, a little background. (If you want more detail, there are a couple nice summaries of the debate on the Stanford Encyclopedia of Philosophy here (by Alfano) and here (by Doris and Stich).) The basic idea behind the situationist challenge to virtue ethics is the following: there are no virtues (of the sort the virtue ethicist posits), because human behavior is extremely sensitive to apparently minor -- and definitely morally irrelevant -- changes in the environment. For example, studies show that someone is MUCH more likely to help a stranger with a small task (e.g. picking up dropped papers, or making change for a dollar) outside a nice-smelling bakery than a Staples office supply store, or after finding a dime in a pay phone's coin return, or in a relatively quiet place than a relatively loud one. The Situationist charges that if the personality trait of generosity really did exist, and was an important driver of people's behavior, then whether people perform generous actions or not would NOT depend on tiny, morally irrelevant factors like smelling cinnamon rolls, finding a dime, or loud noises. A virtue has to be stable and global; that behavior can change so much in response to apparently very minor environmental changes suggests that there is no such stable, global psychological thing contributing significantly to our behavior. That's the basic Situationist challenge.

Defenders of Virtue Ethics have offered a number of responses to this situationist challenge (the SEP articles linked in the previous paragraph describe a few). Here is a response that I have not personally seen yet: a person's mood is a significant mediator between the minor situational differences and the tendency to help a stranger. When we describe the experimental results as a correlation between a tiny, apparently unimportant environmental change and a massive change in helping behavior, then the experimental results look very surprising -- perhaps even shocking. But it would be less surprising or shocking, if instead of thinking of what's going on in these experiments as "The likelihood of helping others is extremely sensitively attuned to apparently trivial aspects of our environment," we rather think of what's happening as "All these minor environmental changes have a fairly sizeable effect on our mood." For to say that someone in a particularly good mood is much more likely to help a stranger is MUCH less surprising than "We help people outside the donut shop, but not outside the Staples." In other words: if mood is a major mediator for helping behaviors, then we don't have to think of our behaviors as tossed about by morally irrelevant aspects of our environments. That said, we would have to think of our behavior as shaped heavily by our moods -- but I'm guessing most people would probably agree with that, even if they've never taken a philosophy or psychology class.

Now, you might think this is simply a case of a distinction without a difference, or "Out of the frying pan, into the fire": swapping smells for moods makes no real difference of any importance to morality. I want to resist this, for two reasons; one more theoretical/ philosophical, and the other more practical.

First, the theoretical reason recognizing that mood is a mediator in these experiments matters: I don't think a virtue ethicist would have to be committed to the claim that mood does not have an effect on helping behaviors. Virtue ethicists can agree that generosity should not be sensitive to smells and dimes per se. However, the fact that someone who is in a better mood is (all else equal) more likely to help strangers than someone in a worse mood is probably not devastating evidence against the virtue ethicist's thesis that personality traits (like generosity) exist and play an important role in producing behavior.

Second, more practically: one concern (e.g. mentioned by Hagop Sarkissian here) about the Situationist experimental data in general is that often times we are not consciously aware of the thing in our situation/environment that is driving the change in our behavior (I may not have noticed the nice smells, or the absence of loud noises). But mood is different: I have both better access to my mood, and a baseline/ immediate knowledge that my mood often affects my behavior. Whereas given the situationist's characterization of the data, I often don't know which variables in my environment are causing me to help the stranger or not. So if I am in a foul mood, and realize I am in a foul mood, I could potentially consciously 'correct' my automatic, 'system-1' level of willingness to help others.

Of course, on this way of thinking about it, i.e. mood as mediating, I often won't know what is CAUSING my good mood. But that's OK, because I will still be able to detect my mood (usually -- of course, sometimes we are sad, or angry, or whatever, without really noticing it. But my point is just that we are better detectors of our current mood than we are of the various elements of our environment that could potentially be influencing our mood positively or negatively).

So in short: I think the situationist's challenge to virtue ethics is blunted somewhat if we think of mood as a mediator between apparently trivial situational variables and helping behaviors.
Posted by Greg Frost-Arnold at 7:36 AM 1 comment: