A few thoughts on Moti Mizrahi's "The Pessimistic Induction: A Bad Argument Gone Too Far"

This post is exactly what the title says. I found this paper especially thought-provoking, so I wanted to try writing down/ nailing down exactly what those provoked thoughts were.

Here's the bit from the paper that I want to focus on:


The theories on Laudan's list were not randomly selected, but rather were cherry-picked in order to argue against a thesis of scientific realism. If this is correct, then the pessimistic inductive generalization is a weak inductive argument.

To this pessimists might object that, if we simply do the required random sampling, then the pessimistic inductive generalization would be vindicated and shown to be a strong inductive generalization. So, to get a random of sample of scientific theories (i.e., a sample where theories have an equal chance of being selected for the sample), I used the following methodology:

- Using Oxford Reference Online, I searched for instances of the word 'theory' in the following titles: A Dictionary of Biology, A Dictionary of Chemistry, A Dictionary of Physics, and The Oxford Companion to the History of Modern Science.
~ I limited myself to these reference sources to make the task more manageable.
~ Since it is not clear how to individuate theories (e.g., is the Modern Evolutionary Synthesis a theory or is each of its theoretical claims, such as the claims about natural selection and genetic drift, a theory in its own right?), I limited myself to instances of the word 'theory.'

- After collecting 124 instances of 'theory' and assigning a number to each instance, I used a random number generator to select 40 instances out of the 124. 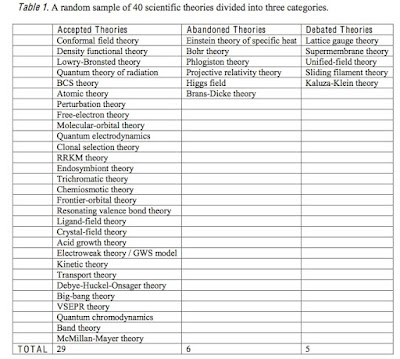 ...
Based on this sample, pessimists could construct the following inductive generalization:

Clearly, this inductive generalization hardly justifies the pessimistic claim that most successful theories are false. Even if we consider the debated theories as false, the percentages do not improve much in favor of pessimists:


The first thing I wanted to say is that I really like Mizrahi's basic idea here. Philosophers (myself included) sometimes throw up our hands to soon and say that some question is intractable, so I really appreciate that Mizrahi did the work of collecting some data that could place constraints on answers to certain versions of the pessimistic induction.

Here are four thoughts I had about the particulars of Mizrahi's method.

1) 3 of the 4 textual sources are (apparently) supposed to be present reference works for contemporary science, and I assume discarded/ superceded theories are much less likely to appear in such a reference work than in history of science reference works (which the last of the 4 is -- so I am curious whether the percentages would change significantly if we just looked at that 4th one, and/or other works that purport to cover the history of science, up to the present day).

3) The scientific realism debate is often/usually supposed to be restricted to ‘fundamental’ theories -- whatever those are. I don’t know how many of the theories in Tables 1 and 2 would qualify as fundamental. I have attached the table, so you can see for yourself; I'm pretty sure a good portion of them are fundamental, but I also think some of them are not. I don't know several of these theories (RRKM theory, anyone?), but again I wonder how that would affect the percentages.

4) I don't have very strong leanings/ intuitions pro or contra scientific realism (I currently think of myself as an agnostic/ quietist, looking for slightly more well-posed questions in the neighborhood). But something that happens either 15% or 27% of the time does not feel like a miracle (as in 'No-Miracles Argument') to me. Of course, more moderate realists may well say that all they claim is that Pr(Theory is true | Theory is successful) > 0.5. But I have heard a few realistically-inclined people recently talk about 'the no-miracles intuition' or something similar -- but presumably a miracle does not need to be invoked if I predicted your dice roll would come up '4', and then you rolled a 4.
Posted by Greg Frost-Arnold at 4:39 AM 2 comments: