What type of contradiction, if any, is this? 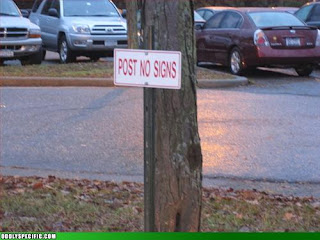 Discuss.
Posted by Greg Frost-Arnold at 7:08 AM

It doesn't even fail to follow its own command, for the scope of its command is something like "you guys (who are not me)".

The sign does insist that no signs ought to be posted. Yet it did not insist this until it was actually secured in place. So the posting of this sign did not violate the imperative.

More genrally, declarations of the form "I PHI, and no one should PHI" are hypocritical. Hypocrisy is not contradictory in the sense of asserting something that's logically false, but I'm sure we could give a plausible definition of "contradiction" (either for ordinary language or some deontic logic) such that it would be one.

@Bryan: It's certainly not a 'run-of-the-mill' contradiction -- hence the 'what type' in the post's title. I was thinking more like Moore's utterances of the form 'p, but I don't believe that p', or someone uttering the sentence "I am not uttering a sentence in English". Neither of these sentences are run-of-the-mill contradictions: their truth does not entail their falsity and conversely. But they are often called 'pragmatic contradictions' or 'performative contradictions'.

Also, when dealing with commands, we probably should be thinking not about truth and falsity, but obeying and not obeying. Thus for example I think "Don't follow this command" is clearly an imperative contradiction, since it is obeyed if and only if it is not obeyed. (Whereas a contradictory declarative sentence is true iff it is false.)

@Jonathan: So you think this sign is saying exactly the same thing as "Post no signs except this one"? i.e. that those two signs/ commands are synonymous? What's the evidence? They appear to me to have different semantic content: one declares an exceptionless rule, and the other declares a rule that allows an exception.

@P.D.: I don't think that the sign is merely hypocritical (it doesn't say "This is a sign"), though maybe you're right. I guess it isn't like "Don't follow this command" -- it's more like the librarian, while in the library, saying "No one is allowed to talk in the library." In declaring the rule, you have to break the rule (assuming we don't go Jonathan's route and say that rules don't apply to the declarations of those rules).

valdaluebbert said...
This comment has been removed by a blog administrator.
19/12/09

Indeed, I agree that the sign in question does *not* have the same semantic content as "Post no signs but this one." But that wasn't what I was saying. Rather, I claim that the sign, having been posted by the owner of the land on which it is posted (or by some proxy), asserts something like, "All the rest of you, post no signs." Commands are for or to someone, and in this case, the scope of "someone" does not include whoever posted the sign.

As it is, I take it that the sign is supposed to discourage people from posting flyers on the tree -- similar to the "Post no bills" signs that one sees from time to time at street corners (usually on either government signs, like stop signs, or on telephone poles).

One consequence of my view is that it would not be improper for the same person to post another sign alongside, reading "And also, stay off the grass."

(I do not mean for this to be a general interpretation of commands -- some commands *do* include the asserter in their scope.)

I think I may be agreeing with the same track Jonathan is on. I think the problem is that the obligation is ambiguous. It can be read passively or actively:

Possibly my wording may cause confusion, but let me try to flesh out the distinction I see.

In the first case, the scope of the obligation depends on the scope of the (you). For instance, (1) can be said to say "It is obligated that Steve not post signs." In which case, the obligation does not particularly care if signs are posted, so long as signs are not posted by Steve. If this is the correct reading, then there is no contradiction at all. The sign can be interpreted, as Jonathan said, as saying "Everyone but the owner, post no signs."

In the second case, the obligation is on "not posting signs" in general. In this case, it does not matter who posts the signs. Sign posting, simply, is forbidden. If this is the correct reading, then it is either a, as you mention, "pragmatic contradiction."

However, I think the first interpretation is more accurate and there is no contradiction.

Also, hope your new school is good to you. Wish I had taken one of your classes before you had left.

Hi, Michael Mencius here,
It is a,
do as I say, not as I do
-----sort of contradiction.
or a
subscribe to my words not to
my example-------contradiction
or a
post no signs--- excepting
this one----- declaration
or a
I can do as I wish but you
can't--demonstration

I think it is less like a
"this sentence has no meaning"
kind of contradiction and more
like a moral contradiction---
violating one's own ethics rule.

In any case, it is
bureaucratic arrogance and
hypocrisy---and a pox on them!

I agree with others here that the sign presumes or presupposes an authority others lack. So the situation is analogous to a property owner's standing on his own property while saying to others, "Stay off my property."

Also, in keeping with the discussion, I found this (courtesy of University of Chicago's Philosophy department webpage):

I think this helps to draw a sharp contrast between the first picture ("Post no signs") and this picture. The former, I do not think (as noted) is a contradiction of any sorts; rather, it just need to be more specified. The latter, however, I do believe is a contradiction, of the sort that you may have been indicating. That is, I think there is a sharp difference between the two scenarios, such that any specification noted in the former will not help avoid contradiction in the latter.

Thanks. That's a nice contrast. The picture you linked to clearly is (prima facie) pretty close to a plain-vanilla, explicit contradiction, since it (almost) has the form P and Not-P.

Though I now have a further question, for everyone else as much as for you: everyone was willing to read the original 'Post no signs' picture in various ways that made it reasonable (e.g. 'No other signs should be posted'). But in the photo you've linked to, it seems (to me) that there is a clear way to understand the two signs that avoids the contradiction: 'stop' is ambiguous. In the Stop sign on top, 'stop' means 'bring your moving vehicle to a momentary stop.' And in the bottom 'No stopping at any time' sign, 'stop' means something like 'park' (or at least 'remain in the spot for more than 60 seconds,' or something similar). So then your picture is not really contradictory, since 'stop' means different things in the two different signs. (Similarly, it wouldn't be a contradiction if I said 'William is hungry' and 'William is not hungry', if by the first 'William' I meant you, and by the second I meant professor Ramsey in your department.)

By the way, if you didn't already know, Prof. James Woodbridge is extremely knowledgeable about contradictions, and much of his research has focused on them. So he could be an excellent resource if you are interested in this kind of stuff. And please say hello to the folks at UNLV for me!

I do not agree with the ambiguity of stop, or at least not necessarily. The thing is, stop is ambigious in that there is never a time duration specified just by the command "stop." Someone in the library, for instance, can tell me to stop talking, and I stop for 5 seconds, then continue again. I, prima facie, followed the command. If there is any complaint, it is not, for all intensive purposes, a problem with ambiguity. For instance, the person who ordered the command did not have in his/her mind a rigid time frame for the command to take place. This is, at least, what happens in real life. When someone says stop, they mean "for a while," "a long time," or "right now (this instant)."

If the ambiguity you are drawing is not this then I am unsure what you mean. The only ambiguity I see between the two stop signs is that they can be specified as far as for how long one must stop. If this is true, the second, I believe, states that one cannot stop "for any time" and, of course, "at any time."

Lastly, yeah I actually am taking Prof. Woodbridge next semester for an independent study course on Deflationism. Most likely, we will be going over contradictions and paradoxes, since, as I read, deflationism has a hard time dealing with them. And I will be sure to say hello for you.

It's a blatant contradiction, to suggest otherwise is idiocy. It's a slight of hand statement meant to ward off other signs. To delve into the philosophy of whether or not it is a contradiction is pointless, but practical and funny.
Less on topic, I would imagine that this 'sign' that reads not to post other signs is originated in a private corporation or a military facility.

As a recent beginning logician, I'd have to weigh in. For something to be a contradiction, it would seem to have to follow the form "P and not P." The overt information here is "Posting signs is prohibited." One's first reaction may be to then notice that once a sign is posted in the designated area, we can infer that "A sign has been posted" (contradicting the initial claim). The real question (as someone may have already mentioned), is whether or not "sign" has the same sense in the two bits of information. In sentence one, "sign" clearly refers to any paraphernalia that would be posted by an unauthorized citizen (like an add, campaign sign, etc.). Alternatively, in sentence two, "sign" seems to refer to the authorized paraphernalia. Now, this may be a slight detail, but the term "sign" must have the same referent in both cases for there to exist a contradiction. This does not follow the form "P and not P."

On another note, to say that something is "...pointless, but practical..." is a contraction, quite obviously.

Interesting; thanks for that. My initial reaction is that the the following two sentences have different meanings:

(One other note: I don't think a contradiction needs to be of the grammatical form 'P and not-P', as you say. For example, the following two sentences are, by most people's lights, contradictory:

And some people (but not everyone) would even want to classify the following as a contradiction:

Now, of course, you can derive a sentence of the form 'P and not-P' from each of these: from (C2) just with the help of propositional logic, but further assumptions are needed for (C1) and (C3).